The Chief Minister of Gujarat, Shri Vijay Rupani clearly expressed his views that the hard work and skill of labor has contributed a lot in the development of the state-nation and the growth of GDP. 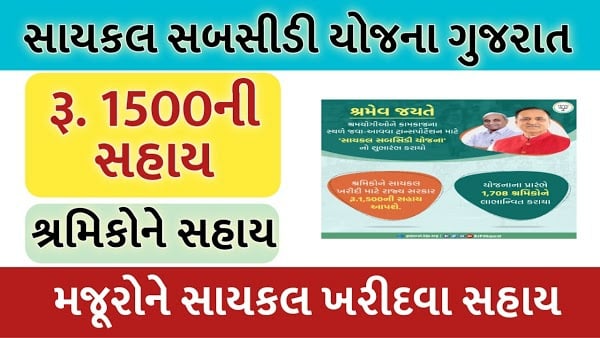 The state government is also concerned about the development of the workers and their families and hence for the welfare of the registered workers the Labor Welfare Board as well as the Construction Workers Welfare Board for the workers of the unorganized sector has been established in the state. The resources of the state government are dedicated workers. It is working with the objective that increase productivity, growth and production as well as GDP is possible only when a worker is satisfied.

The Chief Minister e-dedicated two newly constructed buildings of Gujarat Labor Welfare Board along with mobile application for health check-up of workers, 3 mobile medical vans with a grant of Rs 35 lakh under CSR. 4.95 crores from Gandhinagar in Ahmedabad and Vadodara.

The workers are working continuously with the spirit of nation building in the development of the industry and trade of the state-nation. These workers do not worry about their bread and butter, but work with the responsibility of economic, industrial overall development of the nation-state.

The e-Sarman program began with a two-minute silence for the peace of the departed souls and expressed condolences to the workers who lost their lives in the fire incident in Ahmedabad. All the people involved observed silence for two minutes and prayed for the departed souls. The CM also launched Shramik Aksmat Mutu Sahay Joyna for assistance of Rs. 1 lakh to the families of the this deceased in case of such accidental death in industries.

Shri Rupani also launched "Bicycle Subsidy Scheme" for ease of transportation of workers to and from workplaces. Under this scheme, the state government will be provide Rs. 1500 to buy a cycle. 1708 laborers will be benefitted with the help of Rs. 33 lakh 30 thousand.

The state government has taken steps to make the workers of the state self-reliant. The Chief Minister also encouraged the workers to go ahead with their hard work and fulfill the mantra given by our Prime Minister Shri Narendra Modi.

Stating that Gujarat has become a land of this opportunities for the entire country, the Chief Minister said that workers and artisans from all over the country have settled in Gujarat for their livelihood.

He said that the state government has successfully overcome the biggest post-independence migration by providing more than 10,000 trains and over 2,000 buses to fulfill the desire to return to their homeland in the time of pandemic.

He said that the state government has successfully overcome the biggest post-independence migration by providing more than 10,000 trains and over 2,000 buses to fulfill the desire to return to their homeland in the time of pandemic.

These workers are also returning and returning to their duties with determination to fight against Corona and realize "Hershe Corona - Jitse Gujarat". On this occasion, the Chief Minister actually honored about 100 children of laborers who got government jobs after being successful in competitive examinations. Rupani congratulated the this Gujarat Labor Welfare Board for many welfare activities and schemes.